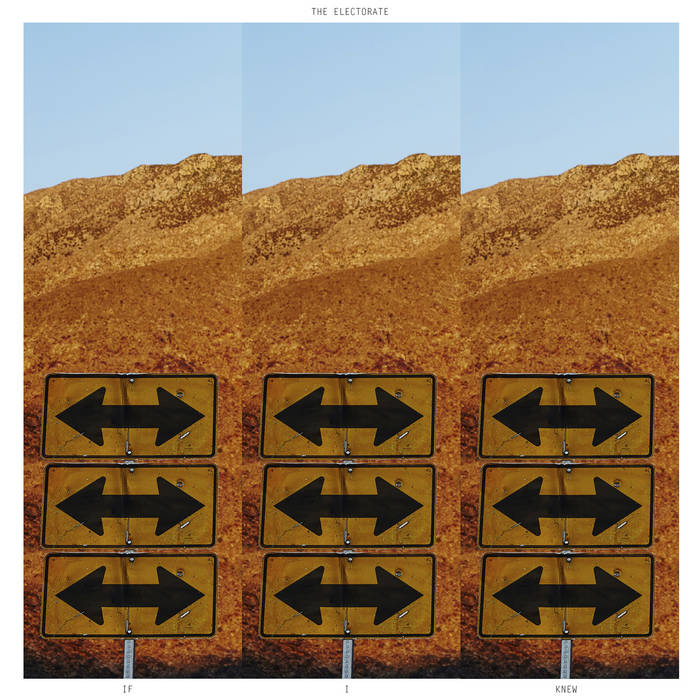 If I Knew is the debut single from the Electorate from their forthcoming LP You Don't Have Time To Stay Lost. The song, and the album, was recorded by Tim Kevin at his Tempe River studios, and mastered by JJ Golden in California.

If I Knew started off life as a jaunty little tune that you could sing the La La La refrain of Iggy Pop's the Passenger over. Then, the week before we recorded it, we took it apart and rebuilt it in the manner you can now hear. Nick joked that it used to sound like the Verlaines, and now it sounds like the 3Ds. He's probably right.

Eliot does killer harmonies throughout and some fine wigging out bass work in the outro/inside-a-south-coast-caravan section. Nick does this killer roll in the same section that sounds like a 14 wheeler swerving into oncoming traffic, and Josh does multiple guitar tracks that channel Built To Spill, Sebadoh, Neil Young, Neil Finn and god knows who else. Maybe someone from the 21st century. Maybe not.

The chorus lyrics survived the coup, but the verse lyrics were completed in bed on the morning the vocal was recorded. Hence the lyric "now it's time to get up once again...." It's a song of gratitude, and confusion, and recognition of what it takes to be a partner to someone in a band, and what a debt for that might look like, if one were keeping a tally. I'm not, as 10,000 mugs of tea wouldn't come close to evening up the score.

It's a lark. It's full of life, and love. It's also the last song we recorded for the album.

I remember that first night
I remember when I met you
Later, when you said “Alright”
Was it just to see Fugazi?
Shall we go out drinking and then tangle our toes?
Shall we keep it like a secret and see where it’s going to go?
Did you think that we would get here in the end? End?

Please make the ring for my left hand
Break it open in the ocean
I will try and understand
but it’s luck and we are lucky
Yeah you’ve indulged my indulgences
I owe you for that
Will you take ten thousand mugs of tea?
I’ll slowly pay you back
Now it’s time for us to get up once again
Fade to end

Produced by Tim Kevin and the Electorate

Recorded by Tim Kevin at his Tempe River studios, and mastered by JJ Golden in California.

The Electorate is Nick Kennedy, Eliot Fish and Josh Morris.

We started off life a while back, when we kicked around as the Templebears. We split, with Nick and Eliot joining Big Heavy Stuff, and Josh starting up Atticus.

Years later we reformed for a one off benefit and decided to finish the album we had started so long ago.

Bandcamp Daily  your guide to the world of Bandcamp